G is for Germany: D is for Deutschland

Docking at Gedser Denmark, the MV Copenhagen ferry belches then tilts its articulated nose skyward like the jaws of a great white shark before spitting out its metal plated tongue over the roadway spewing forth its cargo of huge lorries from across Europe.
After the stampede of trucks, a yellow flourescent worker waves us forward into the belly of the beast for the two hour crossing across the Ostsee to Rostock Germany.
It was twilight as we cycled beside lumpy cornfields and the crumbling remnants of the former German Democratic Republic (GDR). We arrived at Schwaan and set up camp in a grove of pine trees at Sandgarton camp. We enjoyed the lightning flashes, while sheltered against the evening’s thunderstorm.
Cycling in the beautiful Nussentine Schwinzer National Park, a UNESCO World Heritage Site, amongst the primeval ancient moss encrusted beech forests, is some of the best cycling so far. We surprised deer, foxes, squirrels, European stork and ourselves.
Frequently we got lost, straying from the cycle path to follow forest tracks or trails. Managing to survive on a diet from the fruits of the forest, coffee, brott (bread) and chocolate digestives.
After getting lost, Therese calls herself little red riding helmet. The forest reminds us of fairy tales and Hansel and Gretel and the brothers Grimm’s stories.
Germany is layered with history. Waren is a medieval, picturesque, postcard perfect, cobblestoned old town, snuggly nestled by the forest ringed shores of Lake Muritz. Late season holiday makers line the cafes by the marina sucking in the fag end of summer. Waren was also the location of a forced labour munitions complex during WW2 and part of the Eastern Bloc until the wall came tumbling down in 1989 followed by reunification the following year. A local told me it was better before when then there was more certainty and jobs for all.
Cycling in glorious sunshine on the path to Wesenberg we happened upon a sculpture of women and children. We didn’t realise we had stumbled upon the remains of Ravensbruck Concentration Camp, which specialised in the extermination of women and children. It was liberated by the Russian Red Army on the 30th of April 1945 and a memorial and visitor centre keep witness. Therese is reminded of her father Jim who at 19 was with the British army at the liberation of the Belsen Concentration camp.
A young German couple with perfect English explain that this is our somber history: “We are still learning.”
Humans are capable of such cruelty.
Bicycling the old tow path by the scenic Oder-Havel Kanal, Berlin creeps up on us, suddenly it seems we are cycling the suburbs, weaving our way to our inner city campinground (zelt platz).
Locking up our bicycles we purchased all day train tickets which was a great way to explore the famous city. We visited many of the famous landmarks: Checkpoint Charlie, The Reichstag, Charlottenburg, the remains of the old Berlin Wall. There were some some less notable attractions, like the hemp museum and the KeDeWe department store which is home to an impressive selection of 2000 varieties of sausage.
Berlin is once again a reunified powerhouse. Building is taking place at a frenetic pace. The city is alive with diversity and subcultures it’s an exciting vibrant place. 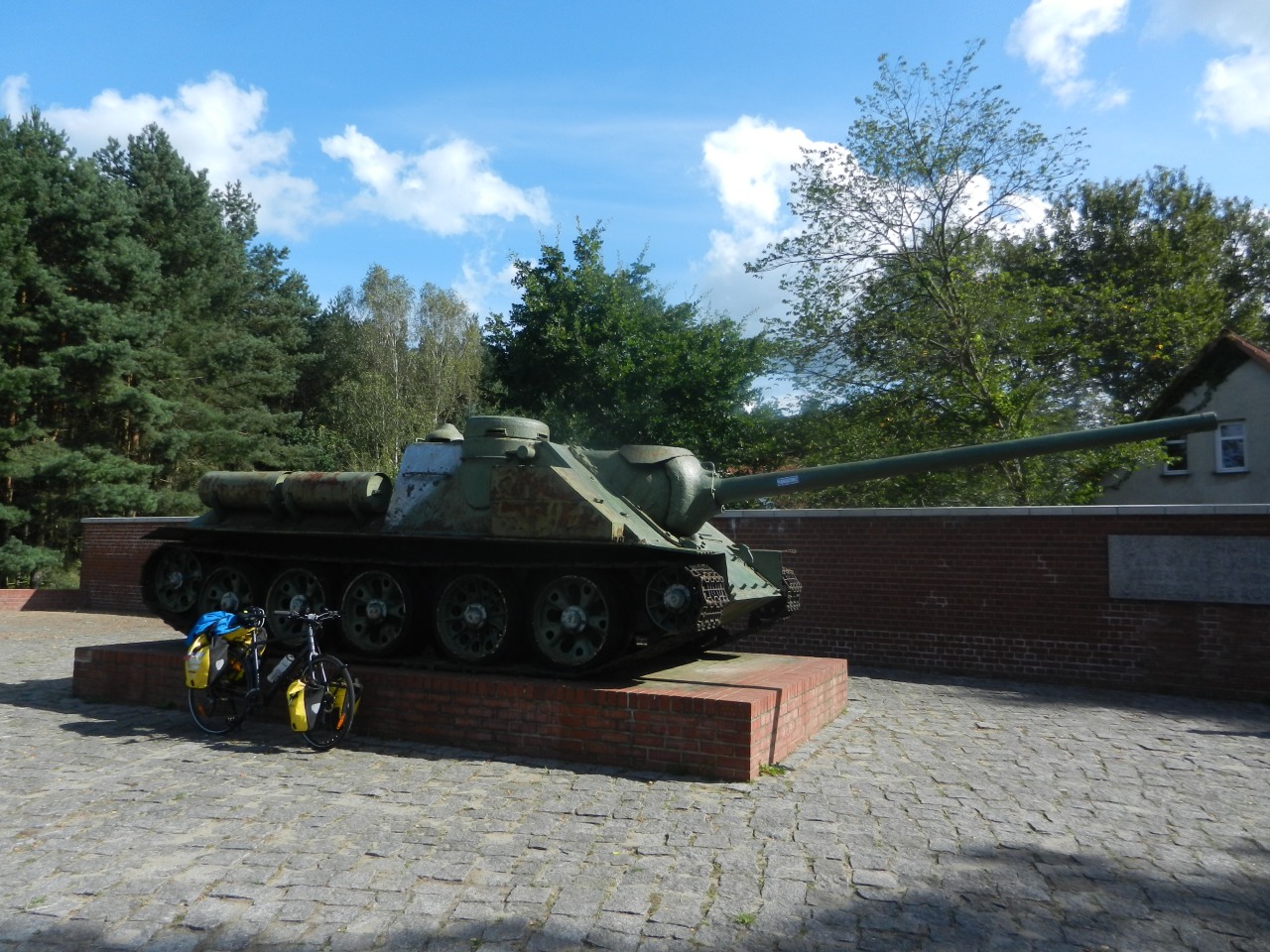