Three a clock in the afternoon is too early or too late to start anything, the tide still had a couple of hundred meters to go before it covered the sandbar and reached the gutters still visible on the low tide. In the Caravan Park I watched as the weathered leathery old geezer made ready to head out, he had an equally old bamboo surf rod with an ancient Alvey side-caster reel, a running sinker rig with ganged hooks ready to take a whole pilchard. The guy looked like he meant business. He said he was after mackerel, salmon or any other toothy critter that might come along. ” Been fishing here a while?” I asked. “Yeah, a little over a month now haven’t caught a bloody thing.”

So after three nights camping right on the beach, it was time to get moving. I had a last early morning fish, I caught crabs, the ocean going ones and lots of little pickers but nothing for the frypan.

Last time I was in Mackay I had to head home to see my ailing mum, this time I’m with Therese and we are combining my cycling with a camping holiday. In effect I’m lucky to have my own personal support crew. With no panniers to carry, all I have to do is ride. Therese waits at intervals providing drinks, food and encouragement.

After servicing the bikes, we went out for a local ride around Mackay and Blacks Beach. it was beautiful in warm sunny conditions until I was violently interrupted by a nasty Magpie attack and I have the marks in the back if my helmet to prove it!

This morning I had an early Father’s Day breakfast of tea and cinnamon raisin toast and after a final check I headed off along the Bruce Highway for Proserpine. Rolling hills, cattle and cane country. The road surface is good although the verge comes and goes. The bridge crossings have narrow or non existent shoulders. Out past the sugar refineries, fields of canes, with a mountain backdrop through range country in warm spring conditions, wonderful riding with a good tailwind. it was almost too perfect.

Bloody Magpies! I was swooped twice today I almost lost control of my bike trying to fend off the raucous birds with one hand, while holding my position on the busy road. Sunday didn’t seem to be a day of rest for the road trains. There was lots of traffic, but mostly it was a fun ride. I stopped occasionally to wait as the narrow gauge cane trains crossed the road. I had forgotten about the smell of road kill. Festering carcasses of kangaroos littered the highway, made to smell even worse in the rising heat. There were other odours too; celery and pepper, aniseed and ginger, tropical smells.

It’s good to be back on the bike riding a long distance on the open road, I feel completely at home on the bike and riding feels as natural as walking.

It wasn’t the first time I had built a town up in my mind only to discover it was less than I had imagined, and so it was with Proserpine. I rolled in and met Therese at the information centre on the edge of town, we decide to head to Airlie Beach 30 kms up the road, which is way to ritzy and overdeveloped for my taste, so we left there and drove to Bowen, which is more to my liking. We set up camp in the Caravan Park then walked along the jetty. There are lots of people fishing, even on the low tide. We saw a stingray and 2 green turtles and a guy hauled in a good sized sweep, much to the excitement of his mates.

So I will have to ride the 67 kms from Proserpine to Bowen that I didn’t ride today in a couple of weeks when we are headed back from Cooktown. 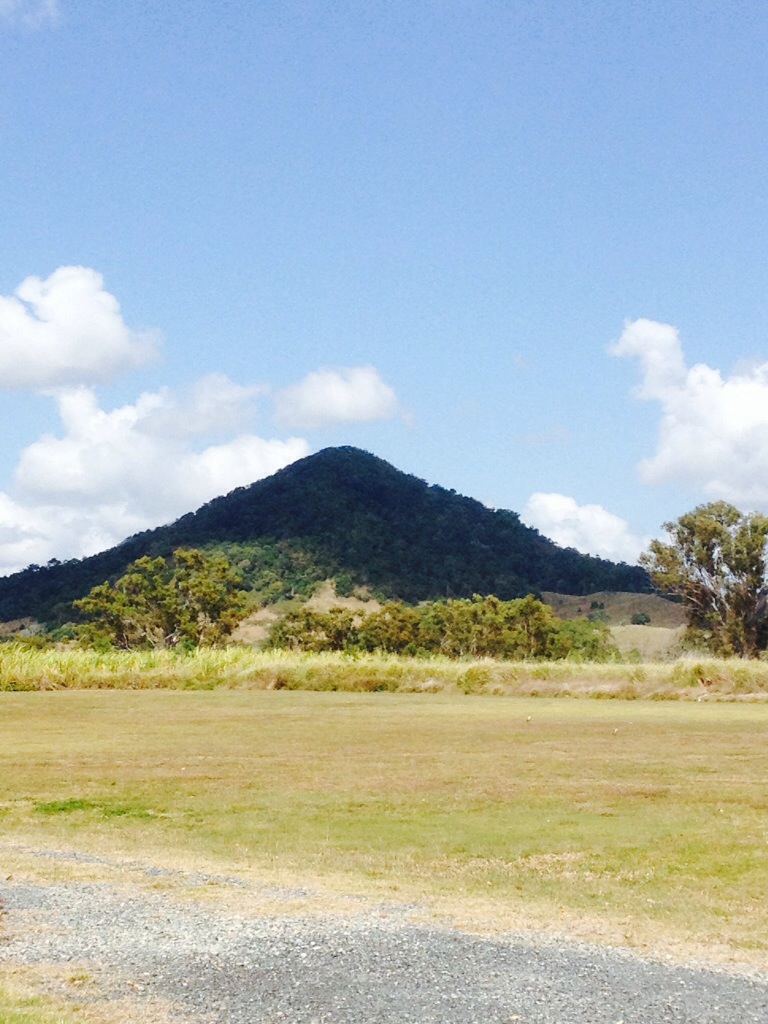 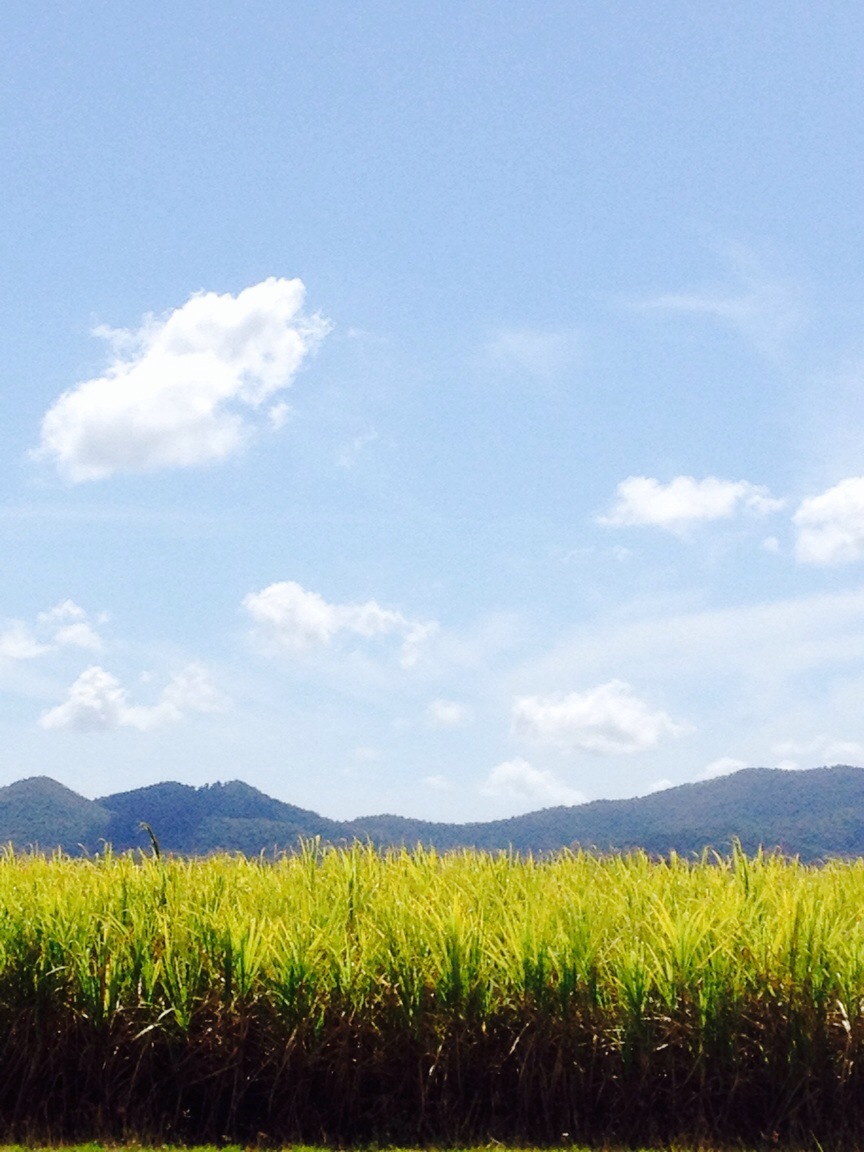 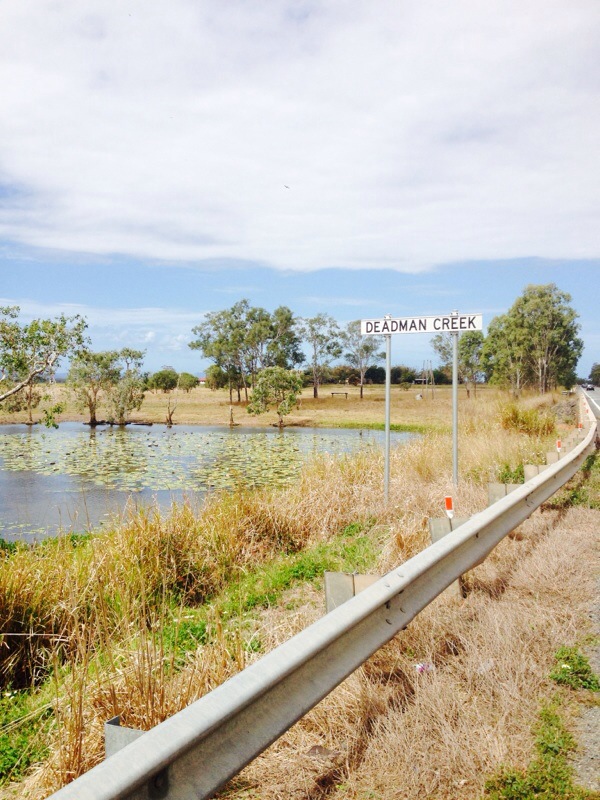