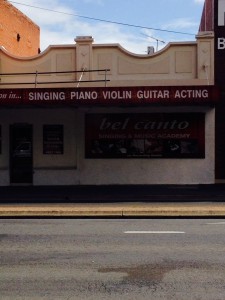 My mail arrived and I sent some of my own,
a postcard to my mother. I activated my new key card did a few domestics then wandered over Rockhampton until I was footsore.

In East Street in the City Centre I stumbled across the Anarchist Collective Art Space and Cafe , however they weren’t open.  I suppose anarchists don’t keep conventional hours. I did like the hand written denunciation of capitalism on the front of their shop.
Rockhampton has a population of around 70,000. Enough diversity for people to be able to find their niche, like Richard, the genteel handyman who works at the park where I have been staying. We have managed a couple of pleasant conversations.

Richard came out to Australia in 1985 from Hereford in England, where a dear old mate of mine once hailed from. Richard sees the irony in being an avid vegetarian in the “Beef Capital of Australia”!

I picked up Bob and Mr Surly from the bike doctor, along with a little bike bling: New gloves, pump and extra bottle cage. Bob has received a few blows with a hammer, as well as a little time in a vice which has proved to be a great attitude improver. Although still not 100% he’s a lot better and tracking true.

Speaking of improving, I received the good news that mums on the mend and in recovery .

I spent a fair amount of time researching The Savannah Way today. Its the overland route across the top of Australia from Cairns to Broome. It would seem while the roads are challenging in parts the opportunity to travel through this part of Australia is quite special. Certainly those that have completed the journey on bicycle speak glowingly of the route  it’s definitely firming up as my preferred option over the Townsville, Barkly Tablelands, Three Ways direction. From Three ways to Darwin I would be cycling over ground I have covered previously, while The Savannah Way will be a new experience

So I’m looking forward to being back on the bike tomorrow , riding the 106 ks to Marlborough then on to Mackay and beyond!