Is that a banana in your pocket ? 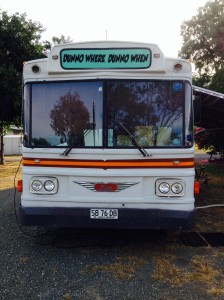 Voyager, Globe Trotter, Rambler, Conquest, Outback, Southern Cross and Adventurer are just some of brand names of Caravans I have seen .Evocative of the road, possibility and adventure. Aspirations the occupants subscribe to, obviously there are countless others, often times people name their on vans as well: “Tipsy Gypsy”, “Just Cruising” and “Midlife Crisis”. Sometimes a couple may have their names and home town in lettering: “Jeanette and  Phil – Grafton”, “Peggy and Dave- Nightcliffe”. 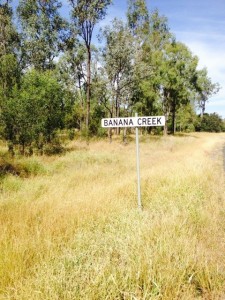 The Nomads seem to defy either category.They are happy to tell you where they have been, where the best free camping sites are and any particular attractions or distractions to look out for. “We might head out to Warwick and then up to Toowoomba and then Caloundra, not sure yet will wait and see what happens.” Said a couple I meant in Goondiwindi.

I’m always the oddity. Pulling into any Caravan Park, so far I’m the only touring cyclist I have seen, but most of the people I see in the parks have seen me before. “Saw you early in the morning just out of Narrabri a week or so back.” or as when I stopped here in Banana, a couple said “We tooted you on the road into Miles”. It’s somehow comforting to know that this community of travelers accept me at some level. 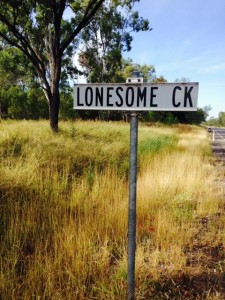 Jack’s been retired for years, each winter he leaves his home in Port Macquarie just to “travel about a bit, you know there are thousands more vans on the road nowadays, more every year, sometimes you pull into place you’ve been to before but there’s no bloody room!” however a traveler on a bicycle is still a novelty.

Lulled to sleep by lowing cattle, on the river flats across from where I camped last night, I awoke to the morning cacophony of bird song. Vegemite on toast and tea, then off for the short 62 kms ride to Banana and a short day on the bike rather than try and pump out 145 to Dululu in one day. 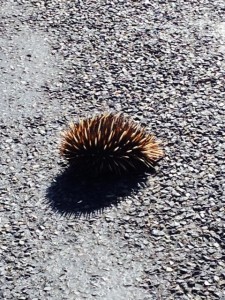 This is irrigation country overflown by nankeen kestrels, those little hovering birds of prey seen all over Australia. I crossed Lonesome Creek and Banana Creek too, then managed to shepherd an echidna off the road into the scrub, thus helping to preserve at least one wild creature. Bob’s been quite difficult. The trailer’s quite loose and needs a little work. It’s out of alignment where the arm meets the skewer.

All going well I should roll into Rockhampto 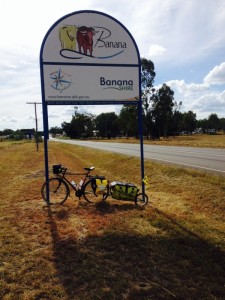 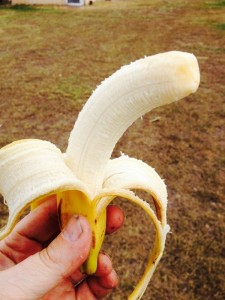