By Cycle Touring Australia and BeyondJuly 16, 2015

Leaving Passau early we made good time along the road and cycle path to Ottenshiem where we took the chain driven cycle ferry across the river to the heavily forested north side of the Danube.

On the ferry the only other passenger is another Australian. Mark is a paramedic from NSW on his own cycle touring adventure. Together over the next few days, the three of us powered along through some picturesque country in hot conditions with a helpful tail wind. Mark was good fun and an easy travelling companion.

Sometimes I feel like I spent all my adjectives, superlatives and attempts at eloquent descriptions somewhere along the California Coast. At the risk of repeating myself the Danube river valley through Austria is breathtakingly beautiful! We cycled 96 kms into Linz feeling tired but elated, making camp at the canoe club by the lake.

The next day, under appropriately leaden skies, we cycled into a murky history. At Mauthausen I couldn’t bring myself to enter the memorial to the estimated 300,000 humans killed in the WW2 Nazi concentration camp. At nearby Gusen we pass another memorial to the bridge that was built with slave labor. The quaint medieval towns, friendly people and gorgeous countryside seem at odds with the horror that took place here.

As the river narrowed the rocky cliffs topped with ruined castles close in. Layers of human habitation are evident as you view the escarpments. With remains of human settlement pre dating the Romans having been discovered here

After a long hot ride of a 110ks through a varied landscape of forest , farms and industry we set up camp in Melk, just before the rain. Melk was the home of the Summer Palace for the elite of the Hapsburg empire. The townscape is dripping in baroque architecture, expensive shops, cobbled laneways and antique shops that cater to passengers from the numerous cruise ships that berth there.

In the early morning rain I was momentarily geographically challenged leaving Melk and almost cycled onto an autobahn, not a good idea. A truck driver alerted us by blowing his horn loudly and screaming at us “AUTOBAHN!”

It’s was 130 kilometres from Melk to Vienna and the countryside reminded me of Vietnam. The heat and terraced vineyards and gardens, the river, the smells of fermenting fruit and compost: Summer in the countryside.

I picked some fresh fruit. Strawberries and cherries are finished now but I found plums and apricots. As I walked through fortified walled ancient market towns I shared time with other cycle tourers from Spain and felt encouraged .Its peak season so bus / boat loads of tourists fill the towns. Luckily in Ybbs we had the Fahrrad (cycling) museum all to ourselves. I was in cycling heaven , spinning wheels , ringing bells , just touching up cycling history .

In Vienna only 6 kilometres from the city, we share our camping ground with touring cyclists from around the world: French, German, American, Polish, Spanish and Italian. Some faces are familiar like the Turkish trio and the Dutch couple, we saw a couple of weeks back in Germany. They greet us like long lost friends “Viva Australia!” We share apricots , laughs and stories of the road.

Vienna is an open air museum. Cycling into the old town to explore its majestic beauty, art, sculpture and history all on a massive scale, I find it quite overwhelming. I wonder about goggle eyed like a carnival clown head, moving from side to side. I’m surprised someone doesn’t come along and pop a ping pong ball in my mouth!
Vienna makes a statement , look at me ! All imperial power.

Tomorrow we might take an official tour to add some context to what we see. In the meantime, it’s enough to loaf about, sitting in cafes and walking through the parks gardens, and town squares

I did go to the Sigmund Freud Museum (no insights there), the Imperial Palace, The National Library and McDonald’s (For the Free wi fi ). 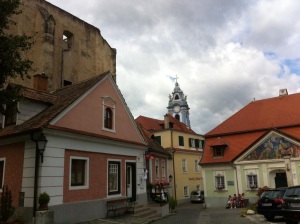 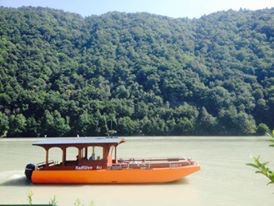