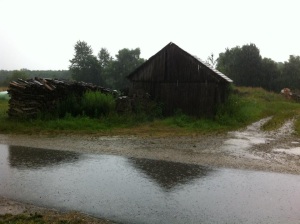 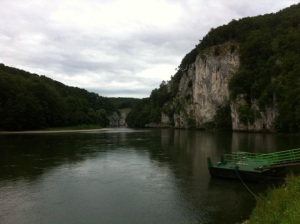 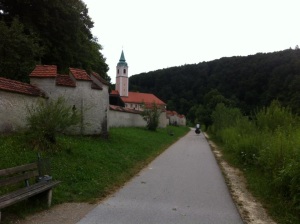 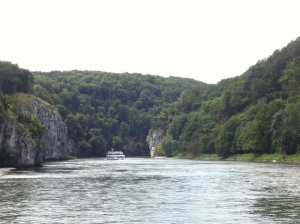 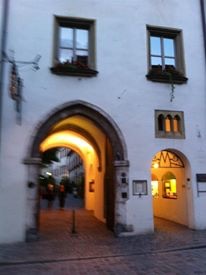 At the beginning, the Danube was little more than a stream as we followed its curves at a leisurely pace, on a good surface of gravel paths and secondary roads through rich farmland and forest. Near Geisingin, the valley narrowed and we found ourselves surrounded on all sides by impressive limestone cliffs topped with numerous castles, abbeys and palaces.

The weather has been really hot: It topped 40 degrees on a couple of days, but after a huge thunderstorm on Monday night, it’s cooler now. We have stayed on farms, on the grounds of Gasthauses, Biergarten’s, canoe clubs and caravan parks. I have eaten my full of roadside cherries, apples and red currents, riding through the scorching heat and pouring rain and loved it all.

The bikes have taken a pounding, but haven’t let us down. Bouncing in out of potholes has loosened the spokes causing a slight wobble, not yet a buckle. The rear disk brake pads get a lot of work and need regular attention and my kick stand tends to slip or overbalance. Nothing major and what you might expect really after 6000 kilometers.

Along the way we have seen so much and had encounters with wonderful folk while eating our fill of strudel, pork knuckle and every kind of sausage imaginable! I even had a Radler: A beer with lemonade or shandy as we would say in Australia. It’s brewed and bottled especially for cyclists (Radler means cyclist in German).

Some highlights of the Danube so far have been:
– The open air Roman Museum at Ennetach.
– Gothic style Church’s and Rathaus (Town Halls) in nearly every village we ride through.
– Medieval market squares with ancient sculptured fountains.
– Mineral springs and baths along the way which are a welcome tonic for a weary cyclist on a blistering hot day.

We cycled past Einstein’s birthplace in Ulm, where 80% of the city was destroyed one night in 1944 during a bombing raid!

I marvel at the well preserved architecture of the small market towns, where we often had to pass through the old gate to the city. Standing in the courtyard of the 16th century palace at Neuburg, I eavesdropped on an English language tour of the grounds. Apparently the frescos are so well preserved because they were painstakingly etched into the masonry.

The Danube grew wide out of Neuburg. Weirs and power stations lined the banks. However, in comparison with the Rhine, it was far less industrial. We cycled through a National Park forest and alongside lakes into Ingolstadt in the heart of Bavaria. Mary Shelly’s Frankenstein was set at the University of Ingolstadt and apparently the best beer in the world is brewed there.

The Danube narrows through a deep Gorge at the magnificent Weltenburg Abbey, which was founded in 610 ad. I heard some Australian voices and met Fran, Ann and Janis three retired women from South Australia who are also on tour. It was great to share some stories from the road. We had lunch at the Abbey then took the 20 minute ferry ride to Kelheim thus avoiding a torturously steep climb. It was quiet and serene cruising the river.

At Regensburg we caught up with Alex and Steph, a couple of local touring cyclists who stayed with us in Melbourne when they were cycling around Australia on a tandem bike a few months ago. They treated us to a Bavarian Biergarten feast and an insider’s tour of their UNESCO listed and breathtakingly beautiful city. I was lost in my imagination as I walked the alleyways and narrow cobblestoned streets past colourful houses, boutique shops and cafes. The centrepiece of Regensburg is the gothic style cathedral which took some 800 years to complete and the 1000 year old Roman Bridge which is still in operation. I stood at the foot of a castle called Porta Praetoria which was built by Roman Emperor Marcus Aurelius in 179 AD. I couldn’t help but reach out and touch the smooth textured stone at the base of the building. My imagination wandered: Craftsmen, slaves, Romans.

Today in near perfect cycling conditions, 25 degrees wi tail wind, we cycled the last section of the German section of the Danube, from Straubing to Passau. The day started with Vegemite on toast courtesy of Alex and Steph, then a ferry crossing just past the town of Bogen. We had company on our ride today, Dosh, an English cycle tourist on his way to India.

Passau is a spectacular looking city, we may stay here for a couple of days to explore its beauty. At St Stephens Cathedral they hold daily concerts on the largest church organ in the world (17,974 pipes).

We have set up camp at the canoe club on the banks of the river with a couple of dozen other touring cyclists of all ages from across Europe, including families. Its summer and the cycle route from Passau to Vienna is apparently very popular.