A Bridge Too Far: For Whom the Bell Tolls

By Cycle Touring Australia and BeyondMay 29, 2015

Like a living expression of a Rembrandt still life, a potted plant or vase of flowers sits perfectly centred behind highly polished front windows in almost every Dutch house we pass. perhaps it’s a reflection of their love of nature and home.

In the rural areas we have been cycling through, most of the population lives below sea level. Reliant on the ingenuity and integrity of the dykes for their livelihood and peace of mind.

Despite the intensive farming of Tulips under a sometimes endless horizon of glass houses, rustic farm cottages resembling a story book old McDonald’s farm abound. Miniature, or Pit Ponies, are popular in the farm yards. They are kept as pets or used as companion animals. Once bred for novelty by the rich. Evidently they became part of a booming export trade to England in the 1840’s when parliament banned the use of children in the mines and a market emerged for equally hardworking and expendable creatures of diminutive size. It would be laughable if it wasn’t true.

Thr FIetspad or bikepaths at fantastic. Our journey is made so easy. One path led us on to a ferry and before I realised ,we were moving across the river

A single quick ring of their bell is used by Dutch cyclists as a courtesy to let you know they are passing. It’s a welcome sound if you are a wide eyed cycling tourist like me, prone to moving off your line and drifting too far left. But out here in the countryside it’s not other cyclists we worry but wildlife.

Therese almost singlehandedly killed Bambi, when she startled an errant deer, who in panic chose to dive into the canal and swim across the other side to escape us. A bit later, a pheasant with an exaggerated gait, ran for its life in fear of being mowed down before realising he could fly and took to the air!

There is always something to marvel at, cheeky hooded crows or jackdaws, red squirrels, beautiful gIant European white storks, foxes and their prey jackrabbits, lazy dairy cows, goats, sheep on the path,horses, pigs, chickens and of course the ever changing landscape.

It started pouring rain as we cycled into the restored medieval town of Rhenen. It was almost completely destroyed during the Second World War. The 15 Century St Cunera Church survived the war damaged and has since been restored , Displays and photographs in shop windows paid tribute to those who died.

St Cunera sang to us: Carillion Bells set high in the belfry rang out across the countryside, cycling away towards Arnhem. I was undecided if it was a song of celebration or requiem. It was really beautiful and haunting .

Arnhem was the focus of Operation Market Garden an allied paratroop mission in 1944 made famous in the 1970 movie staring Robert Redford called A Bridge too Far. Cows now graze on the lowlands beneath the Bridge. I don’t like war or Memorials to it, so purposely avoided the crass tourist orientated theme park like exhibits and associated memorabilia, but fate had other ideas.

Cycling out of Arnhem along the top of the dyke, I stopped to adjust my pannier somewhat absentmindedly I walked to a small plaque nearby. It was a memorial in Dutch for a 21 year old RAAF pilot Bruce Williams from Melbourne Australia who died selflessly are saving the lives of his crew.

We pushed on in warming conditions to Waakstrand caravan park on the banks of the Rhine River where we went to sleep to the soothing sounds of the barges going up and down the river.

I expect to cycle into Germany in the next day or so. 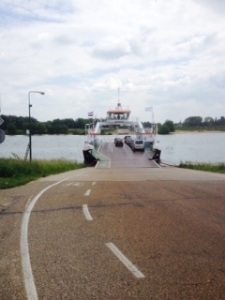