A Dirty Day to Coos Bay

By Cycle Touring Australia and BeyondApril 14, 2015

Sometimes you run out of superlatives when you’re lost in the moment. Cycling up along the steep cliffs along the coast, through the early morning sea mist. In low gear, pedalling slowly, taking in the spectacular scenery along this wild awe inspiring section of the Oregon coast. At times the shoulder is narrow, other times it’s non existent. Waterfalls on the left and the boiling sea on my right. I slipped on the wet road and I almost lost control of the bike. Gulp!!!

The basalt cliffs have been cut to shreds by the relentless waves, creating deep chasms, blowholes, small islands, rocky outcrops and churning waters. Coming up the deliciously named Strawberry Hill, I heard a sound like barking dogs. I looked over the cliffs edge onto the beach below and I could see a herd of sea lions and harbour seals.
We stopped and watched in amazement as the herd called to one another. Some swimming out to sea, others on the beach seemingly awaiting their return. Along the cliff face osprey, glaucous gull, cormorants, along with other seabirds kept watch or wheeled through the air as we cycled up the Devils Elbow.

It was time to pass through another tunnel. Pressing the button to alert the following traffic to our presence, we made it through ok. We then enjoyed the run down into the town of Florence where we picked up supplies for our camp at Honeyman Memorial State Park. we arrived early and we took advantage of the sunshine to dry the tent and some soggy clothing.

Relaxing around the campsite, we were visited by inquisitive grey squirrels, blue jays, ravens and white crowned sparrows, all on the look out for a free feed.

This is sand dune country, lots of folk bring along their ATV’s to have some fun roaring around the dunes, we fell asleep to the sounds of nearby campers laughing and woke up to woodpeckers tap tap tapping.

We had planned on riding the 90 kilometres today to Sunset Bay State Park. However, the weather had other plans. Overcast conditions soon turned to wind and showers as we cycled the hilly dune country before dropping down into the small town of Gardiner. It was pouring and there was no shops open so we pushed on to Reedsport for a brunch of oatmeal (porridge) and toast.

The soggy cyclists soaked to the skin, pushed on to North Bend and the imposing Coos Bay Bridge. Bicycles are legal on the bridge, just press the button, activate the warning lights and pray! The bridge is narrow, no shoulder, heavy traffic and numerous logging trucks. We chose instead the narrow sidewalk. Pushing along carefully in the cross winds, torrential rain and splashes from passing traffic we watched groups of clam diggers on the flats below as we passed.

In Coos Bay we took a cheap room, time to dry out and warm up ! 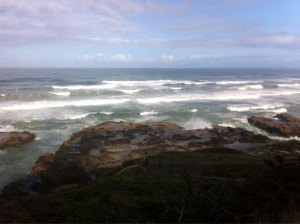 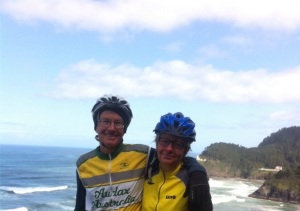 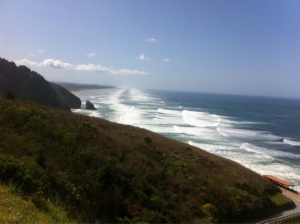 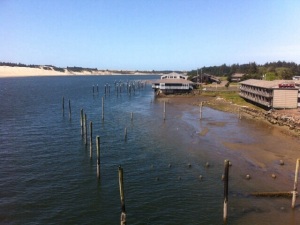 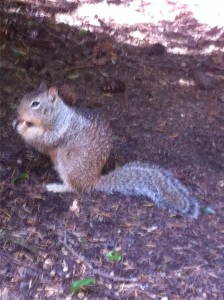 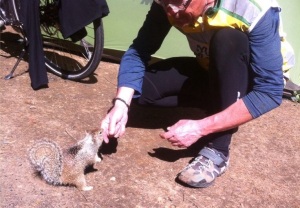