A motley crew of around 20 campers, a few dogs and children had gathered around the highest dune to watch the brilliant sunset from Cape Lookout. As the sun sank below the horizon, spontaneous applause briefly erupted acknowledging we had all just shared a moment. As people then turned to walk away a guy said to nobody in particular “I hope it comes back tomorrow.”

We used the racoon- proof food safes provided at our hiker biker site, however in the dead of night one of the pesky rascals managed to make off with one of my panniers, which I found in the morning about 30 meters away! Racoons are known for unzipping backpacks, thankfully they didn’t get into the tent and no damage was done. We saw no sign of bears or cougars phew!

It was a 3 mile climb first thing in the morning, out of Cape Lookout. It sure woke me up and got the blood flowing. We passed Anderson Point, a favourite launching place for hang gliders and a perfect vantage point to view more of the spectacular Oregon Coast thats getting more beautiful each moment, if that’s possible. Lots more steady climbing along forested roads allowed me to practice my tree identification skills: Western Hemlocks, Sitka Spruce, Red Cedar and at road level wild flowers and Skunk Cabbage, huckleberry, native roses and blackberries along with so much more.

We were tired as we rolled into Lincoln City under a cloudy sky. After a great chat with the friendly camp ranger Richard at Devils Lake State Park in the centre of town, we camped under a camellia bush on a fresh carpet of flowers. Well it rained and poured all night. Waking in the morning, the tent looked like it had chicken pox from all the pink petals stuck to the fly!

Over a light breakfast at Pirates Coffee in Lincoln City, we got talking to Michael a chiropractor and father of four. A really nice easy going fella, we had a relaxed conversation about kids politics and our hopes for the future.

The Oregon Coast bicycle route mostly follows highway 101 however along yesterday’s section we were treated to some wonderful diversions. The climb up through rugged country to Cape Foulweather was memorable not only because the sun was shining but it was named by none other than Captain James Cook, the same man credited with discovering Australia is also well known for his third (and final) expedition where he discovered the North West Passage.

We stopped for lunch, clam chowder, in Newport where we meant a couple of German guys who were also cycle touring the 101. Miraculously they had heard of “The older Australian couple” it’s a small world the touring cycling community it would seem.

We crossed the magnificent Newport Bridge, an Art Deco masterpiece then made good time in great conditions along rolling coastline, past colonies of basking seals to our hiker biker camp at Beachside State Park.

Walking along the shoreline on the rising tide we see thousands of by the wind sailor, a small blue jellyfish. Another great day in Oregon. 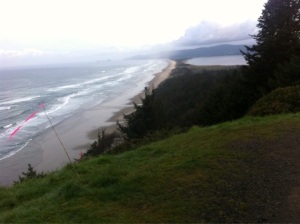