Tired in Triabunna now after a hard day at the office.

We took the back road from Hobart to Richmond over the Bowen Bridge and up through Risdon Vale. I soon found out it was a favourite training ride for the Sunday cycling crew. Bunches passed us as we climbed further up grass tree hill. “Save a couple of gears for the climb” yelled a guy in a passing group. I thought we had climbed the hill already! Climbing was to be the order of the day. You do get reward for effort, the downhill into Richmond for breakfast was exhilarating!

At Richmond, a friendly local cyclist gave us directions:
“A shortcut” he said.
“Easy” he said.
“A little gravel” he said.

Along the road there was lots of evidence of what happens when nocturnal native animals meet cars. It wasn’t pretty.  Possums and wallabies mostly and we also saw one Tasmanian devil.

It was hard going in glorious country. We really felt the extra weight in the panniers, but hey that’s cycle touring. Everything takes longer. It would have been a tough day on the road bike too.

Therese impressed me with her grit and determination. Even on the steepest of gradients she pushed on. She just finds her own rhythm and peddles on.

I cycled this section back in October. Bust Your Gall Hill is painful, short, sharp and nasty. We stopped half way up and had a great conversation with Dave a fellow touring cyclist, who made an effort to turn around and come back to where we had stopped. It’s always nice to discuss rides and compare notes with others who understand the pace.

Kicking back in the camp kitchen after setting up camp and a long hot shower I’m exhausted but satisfied. 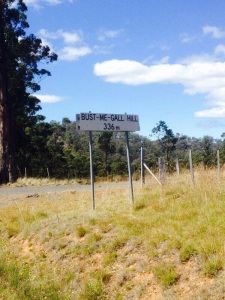