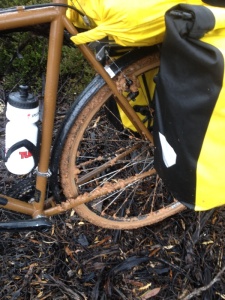 In my imagination, there was the unmistakable aroma of a freshly baked cinnamon sugar tea cake! Yum but of course it couldn’t be true. It was just the fresh early morning air I guess. Its a good 180kilometers to the next sign of civilisation, including the famed longest straight stretch of road in Australia 145k. My plan is cover half the distance then find a bush camp.

The first couple of hours were good despite the cross wind, laser straight with scant bush on either side. It’s been said that some people go a little crazy on this stretch , not me, I live mostly in my head anyway so I just found a nice cadence and powered along all the while having my own internal dialogue.

Around mid morning the wind picked up, then the rain began to hammer down and the weather settled in. I was soaked to the skin. Pushing on, I reached the 95 kms mark as I topped a rise. The horizon stretched on with no visible cover for a camp. After peddling on for a further couple of kilometers, I doubled back to a piece of bush. The moment I left the road surface, I was mired in thick mud. The fine talc like dusty soil becomes sticky, gluey, viscous mud on contact with water.

I ploughed on through the scrub a few hundred meters off the road until I found a suitable place to camp, just as the rain stopped! I made camp breaking one of my tent poles in the process. Let’s just say at that point I had a moment; soaked, cold, with a broken tent, my bike gear and me covered in mud.

Within an hour I had the camp set up, tent fixed and put dry clothes on, sitting in my tent just as the rain began again, phew!

Dinner was a peanut butter wrap, boiled egg, then a tin of sardines, just as well I’m camping alone!

“At night the wondrous glory of the everlasting stars” so said Banjo Patterson in his lyrical image[1]image[1]poem ‘Clancy of the overflow’. And so it was. I stood outside in the middle of nowhere, in the middle of the night, looking up at that celestial time machine.

All was quiet in the bush until around 2am when I was woken by howling Dingos around my camp, they soon settled down. Perhaps they were hunting or looking for food. Whatever,  they gave me a wide berth, essence of Nick not to their liking I guess!

I was up at 5.30 am with the Magpies. All my clothes are damp, I put on the least wet stuff, break camp and spend a half an hour cleaning the mud off the bike.

Rolling along the road to Caiguna was fun. Once I got going, however the verge gave out after a few kms Which meant when road trains were passing. I had no choice but to ride off into the mud 7 times and after each off road adventure a few minutes of cleaning was required!!!  I found a little cover at a road side rest stop to wait out the mid morning showers.

I arrived at Caiguna in the early afternoon and this gave me time to set up camp on gravel and away from the mud. I dried my clothes at the camp laundry, then had y first hot meal in a day and a half: Tea and chips yum!
A sign on the men’s toilet door warns of snakes, I reason that the rain keeps them away.