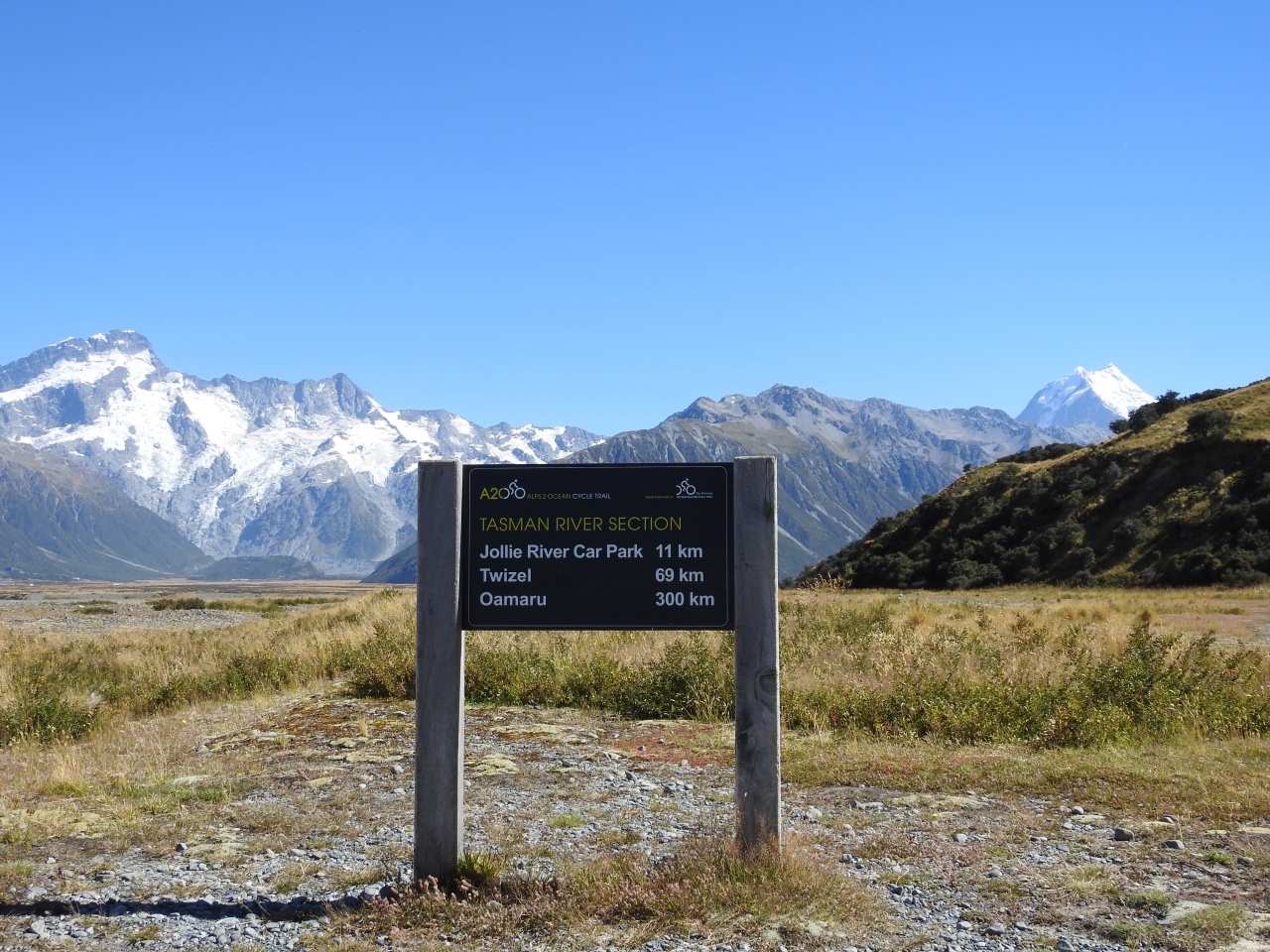 Luck’s a fortune, a volcanic eruption in Bali Indonesia saw us stranded on the tarmac in Melbourne our flight canceled. The subsequent airline credit provided the ideal opportunity for a cycling holiday in New Zealand.

Initially we planned to box up our trusty touring bicycles and fly to Christchurch, then catch the intra city bus to Twizel where a shuttle bus would deliver us to Mt Cook village and the beginning of the Alps2Ocean trail. www.alps2ocean.com

At the last minute we decided not to bring our own bicycles but instead hire Mountain bikes more suited to the varied terrain and our limited timeline of just two weeks, opting to go with Cycle journeys which proved to be a good choice. www.cyclejourneys.co.nz

Arriving in the town of Twizel we picked up our mid range Avanti Discovery Mountain bikes, loaded the panniers before cycling off to the local caravan park to set up camp.

Next morning in near perfect weather conditions, we took the shuttle bus up through the Mackenzie Basin alongside the Ben Ohau Range to Mt Cook Village. From there, it was an easy flat ride out to the Airport, where the real adventure began with a quick helicopter ride across the fast flowing, quicksand prone Tasman River. For those not wishing to shell out the $130 each for the helicopter, an alternative starting point is at the Southern end of Lake Tekapo where the route takes you along the eastern shore of Lake Pukaki to connect with the main trail.

Glacial melt combined with high river flow saw the trail inundated with water in several places. At one point we watched amazed as a large trout swam across our path! Due to erosion and climatic extremes, at times, the trail isn’t well defined, we pushed on regardless, sometimes through water up to our knees.

Cycling over loose river stones, sand or rocks ever thankful to be riding Mountain bikes, however the trail has previously been successfully completed by folks riding all kinds of bicycles including a group dressed in period clothing riding on Penny Farthings!

We cycled gently through a pulsating vibrate palette of mesmerising colour; snow capped mountains fringed a luminous green on their slopes set off against an impossibly blue sky. Accompained on our journey by honking Canadian geese and beautiful little singing Mohua (Yellow heads).

Gradually the valley opens up, we cycle on some gentle single track across grasslands dotted with New Zealand Flax, red tussock or the spikey native Matagouri bush. Before long, an undulating section of loose gravel becomes a shared logging road. (Get off the road when you see those logging trucks) We rolled on into Twizel, exhausted and exhilarated.

The trail section out of Twizel to Lake Ohau involved a heart pumping 900 meter technical climb to Tarnbrae, along with several creek, river and weir crossings, passing through captivating natural beech forest, before a little downhill single track riding on a rough shingle surface then a picnic lunch on the grass by the lake (No snakes in New Zealand).

From Lake Ohau to Omarama the winding trail saw us cycling on a variety of surfaces, smooth then rough shingle, gravel and sealed roads, even a section of grass track. Cycling through more native forest intersected with fast flowing streams, where we stop to fill our water bottles or just take time to drink in the natural beauty. That evening we camp by the peaceful Ahuriri river.

The ride from Omarama to Otematata had us riding alongside fertile farmland (famous for Merino sheep) in the Waitaki Valley before we dropped down to skirt the picturesque Lake Benmore, its a sharp climb up and over Otematata saddle then we are rewarded with a sensational downhill run into town, to be greeted by a mobile coffee cart selling great espresso and fresh savoury muffins. Refreshed we climb Benmore Dam to follow the shoreline, of Lake Aviemore on a well made section of sealed road with scant traffic, providing ample opportunity to enjoy the craggy granite outcrops which were being circled by squeling wheeling swamp harriers . Camping on the edge of town at Kurow in hot conditions, a refreshing invigorating swim at Kurow creek proved especially soothing to weary cyclists and we slept like babies.

Leaving Kurow in breaking light, cycling past numerous wineries we were impressed by the manicured irrigated countryside, flanked by stands of poplar trees with plump grapevines racing off into the distance.

Crossing the dry Otaike river was a challenge as the trail seemed to disappear completely, however, once across the smooth shingle path saw us shadowing the Waitaki river to the outskirts of the small village of Duntroon where we stopped to explore historical Maori Rock Art.

After Duntroon the landscape changed to hilly limestone escarpment’s that had whethered into convoluted shapes. Cycling in open hot conditions we were happy for the occasional shade, resting up with an afternoon feast of tea scones and chocolate cake at the funky Fort Enfield Tavern.

The last 20 or so kilometres from Enfield to Oamaru was a celebration ride of sorts, we could smell the sea as we rolled downhill through Weston before arriving in the middle of the gorgeous sulptured Oamaru Botanical Gardens, past massive oaks ringed by expansive lawns we followed the well signposted trail which took us right into the centre of the very hip revitalised Victorian / Steampunk City, to the official finish line by the harbour at the aptly named Friendly Bay.

Hugs and high fives, we completed the 310 km trail in 5 days. Perhaps we might have gone a little slower taken another day or two, it all happened so quickly however we didn’t exert ourselves. The cycling was challenging as you might expect but certainly within the capacity of most people.

I highly recommend this trail as a great introduction to cycling in New Zealand. Take extra snacks, a tent a Mountain bike and camera, oh and take a friend, the A2O is a pleasure to be shared. 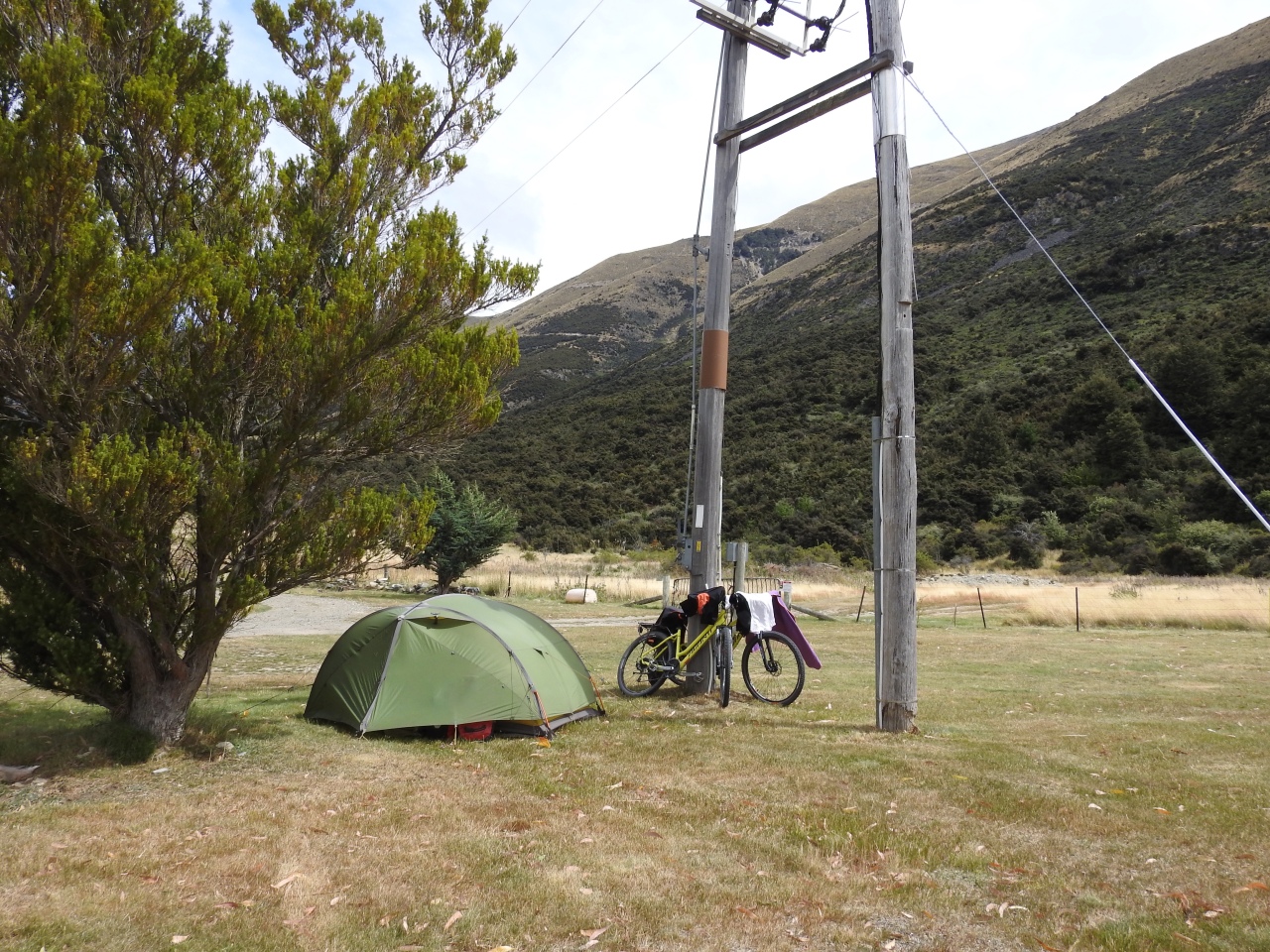