By Cycle Touring Australia and BeyondAugust 27, 2015

In clearing weather Cambridge City was easy to cycle into curtesy of a designated bicycle path. Swarms of students, crowds of tourists and groups of locals, jostled for room along the busy narrow streets that led to Cambridge’s grandest buildings. Highlights included Kings College Chapel, the Wren Library and the Bridge of Sighs.

We camped on the edge of town beside a blackthorn hedge full of fruiting sloe berries. At night the rain was relentless, in the morning it was worse. We packed up inside the tent and cycled off once more into the grey unknown.

The riding conditions grew increasingly lumpy through the Cambridgeshire fens as we cycled the green patchwork of quilted hills, early morning stag deer grazed the stubble of newly harvested wheat fields. Fat wood pigeons cooed their heads off while sparrow hawks darted across the hedge rows in search of prey. We treated ourselves to a delightful afternoon cream tea at the walled garden nursery in the quaint stone built village of Elton.

Warmshowers, the touring cyclist hosting network has proved to be far more than a place to pitch our tent. We have been the grateful beneficiaries of generous hospitality friendship and food provided freely by cycling tourists the world over. We are united by our common love of cycling. Outside the village of Clare, Kevin and Jane gave up their summer sleep out to us soggy Cyclists allowing us to dry out. In tthe old Village of Warnsford, Clive made us feel welcome. He cooked dinner for us, gave us his spare room to sleep in and we shared our touring stories. He has extensive touring experience. We met as strangers and departed friends.

At Loughborough we caught up with David and Penny, a couple of retired well traveled adventurous marine zoologists whom we had met in Tasmania. It was time to get off the bicycles for a few days to tour at a different pace on board their classic canal narrow boat named Arkaroo. It is named after the serpent in the creation story of the Adnyamathanha people of the Flinders Ranges in South Australia.

It was an incredible journey from Shadlow to Stone. We learned how to use the windlass to wind up open and close the gates at the numerous locks along the Trent and Mersey canal. It’s summer holidays so hundreds of pleasure boats travel the canals resplendent in traditional livery, paying homage to the boatmen of yesterday who along with their horses hauled coal and assorted goods along the tow paths. The culture and history of the canals is fascinating and David and Penny graciously shared their local knowledge with us.

Cruising at walking pace the Trent and Mersey canal meanders through farmland, small villages and woodland. There is a voyeuristic pleasure in peering over the hedgerows for a unique view of the world while reed warblers, kingfishers, buzzards, kestrels, jackdaws and Canadian geese make themselves known.

After berthing the boat in the evening we transform into ‘tow path trotters’ tripping along the path collecting fresh plump blackberries.

Life is good life is pleasant. 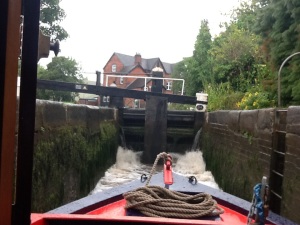 An old railway bridge near Stone