A Green and Pleasant Land

Lesley our generous Warmshowers host had left us a key to her beautiful home, a freshly made blueberry cake and directions to the Southampton Cemetery.

While the team at The Hub Cycle Works in Shirley Road Southhampton did a marvellous job putting our bicycles back together, Therese and I walked off to explore the city which was rebuilt after being mostly destroyed by German bombing during WW2.

In the Old Southampton Cemetery blue steaks mark the graves of those lost on the Titanic. After more than a hundred years the loss still resonates. At the time of the disaster there wasn’t a street in Southampton that didn’t loose a loved one! Perhaps it was Titanic’s maiden voyage with its mix of wealthy passengers and common folk that captured the publics imagination, evidently an overladen passenger ferry sinks off the coast of Bangladesh every other year but we don’t make romantic movies or build monuments to their suffering. It seems our compassion is limited to those we know or aspire to be like.

Criss crossing the country, the modern highway network snakes out across the landscape connecting cities and regional towns to local villages via old Bronze Age pathways, Roman roads and medieval pilgrimage routes. In England the past is ever present.

Using a combination of static maps, the phone’s GPS and local knowledge we manage to avoid the freeways and major secondary roads. We travel along shared paths, cycle ways and local roads. we took a meandering route on our way up to Oxford.

Passing picturesque villages: Chandlers Ford, Otterbourne, Twyford through hedgerows shielding contented sheep up to Winchester. Skirting the South Downs National Park in Hampshire we take the Itchen Way path, more suited to single track mountain bikes than our packed tourers. We get scratched up by stinging nettles and blackberries ouch!

Up through New Alresford then Preston Candover to Basingstoke old town and a local town square market, where we stocked up on farm fresh produce. We also meet Richard, a fellow cycling enthusiast who took a quick snap of our bicycles out front of Macdonald’s (we were there for the free wifi) which incidentally didn’t work. Wifi is patchy here.

We camped overnight in Newbury, avoided most of the A34 which is the main highway to Oxford. We got pleasantly lost in the back country of West Berkshire, passing through villages so small they don’t exist on our map.i half expected to see a knight in shining armour Gothic churches their graveyards littered with tombstones so old they can no longer be read. The interned known only to God if at all.

Lunch in Wantage, birthplace of the Saxon King Alfred the Great and a quick stop at Sainsbury’s supermarket where we picked up much needed supplies.

In warm sunshine we cycled through the villages of Grove, Steventon and Drayton before fiddling our way through the busy afternoon traffic in Abingdon before finding the bicycle path that curls along the Thames, passing narrow boats, all the way to Oxford where we have set up camp for a day or two. 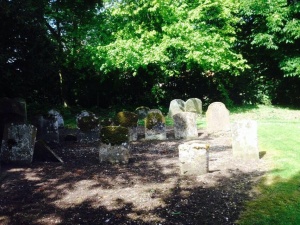