By Cycle Touring Australia and BeyondMarch 11, 2015 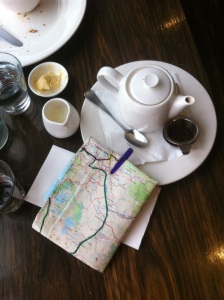 “Nature is your Guide” is one of my favourite go to books and was written by Harold Gatty who was born in Campbell Town. The town has honoured him with a memorial.  His book was standard issue in every United States Navy life raft during the Second World War. Harold also flew as navigator with Willie Post on his around the world circumnavigation of the world in 1931.

So, after a relaxing evening in Campbell Town on the banks of the Elizabeth River we headed off, via back roads, in a north westerly direction. It turned out that the wind was gusting at 35 km per hour from the same direction. It made for a slow but fun filled day, with lots of little rest stops along the way.

The Great Western Tiers on our left provided a spectacular backdrop, we watched as the shadows of the cumulus clouds dotted the range. This is old farming country. We passed many colonial era properties still in operation. Sheep always run at our approach. I called out to one “mint sauce”, which stopped him in his tracks as if he knew his destiny.

Traffic was almost non existent. An old broken down ute with an old broken down farmer driving it stopped and he invited us back to his place for a cup of tea. “My pleasure your risk” he said. It sounded cryptic and we graciously declined.

At different times we had a good view of the Macquarie River, as it snaked along beside us, it’s wide expanses appropriated for irrigation. Sometimes today it was tough going, the head wind with little cover, was relentless. At one point the road was covered in a think smoke from a grass fire which made us cover up.

Wind is never the same. Sometimes it seems to reach right inside you, like a physical presence while at other times it’s gentle. Resting at the base of a large eucalyptus tree by the side of the road, the wind at ground level caressed the grass while in the tree above the noise was deafening. Often it was hard to hear at all. We stopped talking and just ploughed on. Finally on the outskirts of Longford we hit the hedge rows and got some good cover from the wind.

It’s surprising what a shower, food and a good cup of tea can do. Sitting here revived on the banks of the South Esk River, life is good. 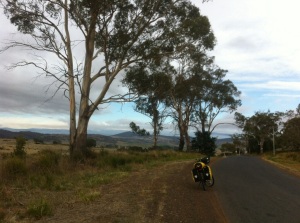 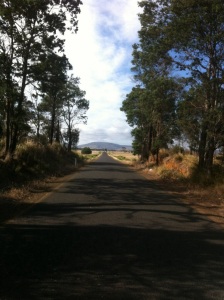