Wafer thin Vladimir approached me slowly with a heavy snub nosed hammer; “You could use this to knock in the pegs”. Trailing in his wake were Gabby, who was so short and fat, she was almost perfectly round and Casper who didn’t speak. These three young folk camped next to us at The Hague and they eagerly explained they were all diagnosed autistics and socially awkward. Vlad said they were hard core gamers who, after meeting online, had decided to meet in the flesh. Gabby was Spanish, Casper Dutch and Vladimir Russian, so they communicate in English. Casper is still learning to talk after being non verbal for most of his 17 years.

It was raining steadily, we packed up camp quickly under bleak grey skies. By the time we arrived at the Hook of Holland to catch our ferry to England, we were literally soaked to the bone. We dried out on the ferry.

At the UK border a thuggish looking custom official stamped my passport then said “Like to talk about the cricket then?” For £5.00 we camped out back of the Castle Inn Hotel in Harwich.

The rain fell heavily all night. We have become adept at packing up inside the tent, keeping everything as dry as possible. We peddled off through the hedge rows and back roads of Suffolk towards Cambridge in incessant driving rain, through an incandescent green landscape of rolling hills dotted with manner homes, farms, ruinous churches and the occasional dead Badger.

Cold, wet and hungry, we took refuge under the arches of a disused church, where we tried to dry off and warm up with a brew of piping hot miso soup.

Even in such atrocious weather, ramblers roam the hills. Stopping at a crossroad I was greeted by Allan and his dog Scamp: “I lost my dog, don’t know where he went, so I got myself a new one, a rescue dog, he makes me happy. My wife’s in the home you see with dementia. I wouldn’t wish it on a rat.” He then he began to cry unashamedly

In the Historic Market Town of Clare we were greeted with disapproving looks as we drip water across the floor of the cafe. The waitress reluctantly had us sit down but not before placing thick copies of the Guardian on the seats of our chairs.

We pushed on through puddles, minor flooding and detours. I wanted to say “It’s clearing”, but the rain was more heavy than ever. The cycling became a bit of a slog, hard going in busy afternoon traffic on small country roads. The safe cycling paths of The Netherlands already a fading memory.

We rolled into the small village of Cavendish. The Duck or Grouse convenience store dates back nearly 600 years and claims to be England’s oldest shop. For 70 pence I bought a half a dozen soggy free range eggs. “Your from Australia, I can tell that voice, wouldn’t be used to the rain. Biking all that way, whatever for?”

I wanted to see England in Summertime. 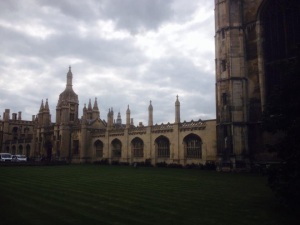