The Streets of San Francisco: “Land of the Free Baby!”

We are meeting more cyclists: Peter from Boston who quit his job 8 months ago, to go off cycle touring without any previous cycling experience. Sarah and Michael a Swiss couple traveling home to begin a Euro Velo tour along the Danube, along with our regular cycling chums Jamie and Liz, two delightful young American women taking the same route as us.

We rode up Leggett Hill, the highest point along the Pacific Coast, over 2000 feet of climbing and contrary to popular rumour, there are no graves of cyclists who didn’t make it!

We stayed at another hiker biker camp in MacKerricher Beach State Park. We camped with 70 year old Gordon a homeless cyclist looking for a small sailing boat and Benjamin a sketchy ex-Las Vegas drug dealer in search of a fresh start in the burgeoning underground Marijuana growing business out of Oregon. We shared a campfire and good conversation with Mary the State Park camp host, but it was Benjamin, the racoon rustling stoner who gave me the trip’s tagline. After Jamie had recommended an ice cream shop in Fort Bragg for breakfast I had protested saying you couldn’t have ice cream for breakfast. Benjamin said “This is America man, you can have whatever you want. Its the LAND OF THE FREE BABY!”

From MacKerricher we headed out through Fort Bragg to the beautiful seaside town of Mendocino. It’s easy to fall in love with a town full of rustic Victorian old world beauty nestled atop a headland facing the Pacific Ocean.

While we are used to the rolling hills, after crossing the broad expanse of the Navarro river, I felt the pain of a couple of steep sharp climbs with nasty switchbacks up out of the tiny town of Elk. We arrived at the Manchester State Beach (KOA) just in time to set up our tent before a torrential downpour, whew! It rained hard all night.

The California coastline provides the cyclist with magnificent vistas at every turn. Reward for effort is provided at the top of every rise as you stare out across a blue green horizon of breathtaking beauty and magnificence. A wild windy day saw us camp early at Gualala resting up in a grove of Californian Bay trees. Up early, we cycled along the coastal road through Sea Ranch, a long rambling community of expensive beach homes with private roads and rickety fences. A breakfast coffee stop at Stewart’s Point General Store was a welcome change. It is a place full of living history and Emphoria, akin to a folk museum.

The weather got warmer and the climbing steeper as we cycled out of Fort Ross up to meet the sky. The verge disappeared as did the safety railing while the traffic increased, at times you were literally on the edge of the world. One slip or false movement could easily send you plummeting onto the cliffs below. The cycling was perhaps the most challenging of the ride so far, however, the sense of accomplishment we felt setting up camp that afternoon in Bodega Bay was extremely satisfying. As was the winding downhill run into Tomales Bay the next day which was lined with oyster bars and fresh seafood.

I had to stop at the Birds Cafe in Bodega Bay named after the famous Hitchcock thriller The Birds that was filmed there. Over fish and chips I kept a watchful eye on the seagulls for any signs of suspicious intent.

Speaking of birds we have seen so much wildlife. Hundreds of red kites accompanied us along the cliff tops. Harbour seals lined the beaches basking in the sun, one had tusks, a walrus perhaps. Osprey grasping fish in their talons, turkey vultures circling a dead skunk (I now know what skunk smells like and it’s not pretty), racoons, chipmunks, elk, deer, squirrels, garter snakes, lizards, banana slugs golden eagles and so much more! Wildlife in profusion.

Liz had invited Therese and I to stay with her and Jamie at her family’s holiday shack in Bolinas just north of San Francisco. We spent a couple of days in this gorgeous funky fishing, surfing farming, eccentric, hippie community. We sat around eating drinking tea and chasing internet access, something we hadn’t had for the last few days. I even managed to do a little cooking; lentil soup and a cheese and spinach pie. Comfort food.

After bidding Liz and Jamie fond farewells we cycled off once more down through the valleys and up across the cliff tops as we made our way to Sausalito where we found a bike path that fed us straight onto the Golden Gate Bridge. Suddenly, in brilliant sunshine, we were climbing up and over the bridge, stopping occasionally to take photos and marvel at the breathtaking view.

We cycled down through the Presidio and Marina neighbourhoods of San Francisco and we will stay here for a few days.
Vancouver to San Francisco via the Pacific West Coast bicycle route is roughly 1700 kilometres and took us five weeks of trouble free cycling, what an amazing adventure so far! 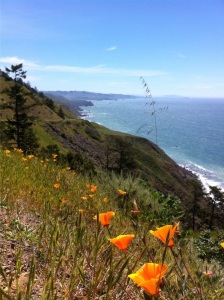