Washington to the Oregon Border

One could easily be seduced by the beauty of the Washington countryside. Admittedly we are here at the beginning of the spring bud. Daffodils are prolific and the state’s floral emblem, the rhododendron, in lusty full bloom.

We have found the American people friendly, hospitable and generous. Darryl, the park ranger at Lady Sylvia State Park, dropped off a lighter at our camp for the fire after I explained mine wasn’t working. “Just leave it at the office on your way out in the morning.”
Yesterday we had a fair bit of climbing in changeable weather. Crossing from Gray’s Harbour County to Pacific County, the heavens opened. At times the going was difficult in wet conditions on a narrow shoulder. We stopped for a well earned rest and light lunch in the lumber town of Raymond by the banks of the beautiful Willapa River.
Down out of the hills, we had a flat run along the coast to the small costal town of South Bend with its crab, clam and oyster shops waiting for the summer crowds. At times, there was a bicycle path that ran parallel to the highway.
The Bush County Pioneer Park was closed for the season, so we pushed on around the costal spit to a private KOA (like a Big 4 Caravan Park) campground just out of the fishing village of Bay Centre with its mountains of razor clam shells. We must have looked a sorry sight or more likely it was just another example of American hospitality. Our KOA hosts Ken an Iris decided to upgrade us from a tent site to a heated cabin, while we watched the window as tiny Rufous Hummingbirds hovered about the feeder left out to attract them.
It’s fair to say that we were apprehensive about today’s ride, crossing the Columbia River from Washington into Oregon across 4 miles of the Astoria Bridge. The Stories of cross winds on the single lane, narrow shouldered roadway alive with massive trucks, and constant bridge work has the cycling forums abuzz with horror stories.
“For 50 cents you can take the bus across and they take your bikes as well on a rack attached to the front.” said Ken.  We took the bus, so glad we did.
Astoria is a funky town famous for its salmon fishing, canneries and where early explorers Lewis and Clark ended their Westward expedition.
While we may have escaped the Astoria bridge, we did have to take its little brother, the Young Harbour Bridge out through Warrenton to Gerhart, a small town of summer holiday homes about 30 kilometres from Astoria where we are are being hosted by our Warmshowers host Pat.
Pat has taken us into her home for the evening. It’s great to share stories, conversation and time. It’s a wonderful way to discover a slice of America . 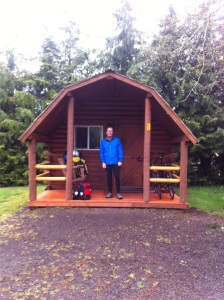 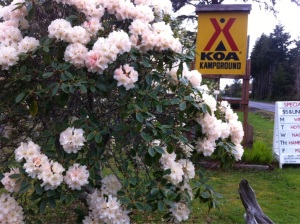 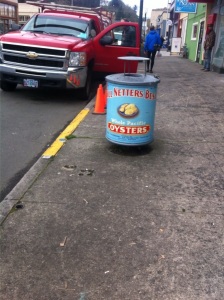 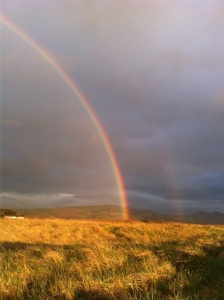